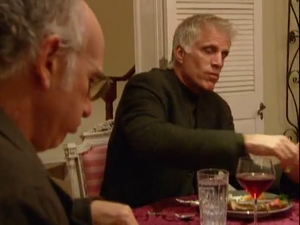 Ted Danson (born 1947 December 29 California United States) he is an actor, and a friend of Larry David and Cheryl David. He is the husband of Mary Steenburgen. He has appeared in every season except for season 8. He is closer friends with Cheryl than he is with Larry, and in the episode The Anonymous Donor, Larry laments how close he is with Cheryl. Larry often believes that Ted is upstaging him.

Season One: "Ted and Mary"

Season Six: "Meet the Blacks", "The Anonymous Donor", "The Freak Book" and "The Tivo Guy"

Season Nine: "Foisted!", "The Pickle Gambit", "A Disturbance in the Kitchen", "Running with the Bulls" and "The Shucker"