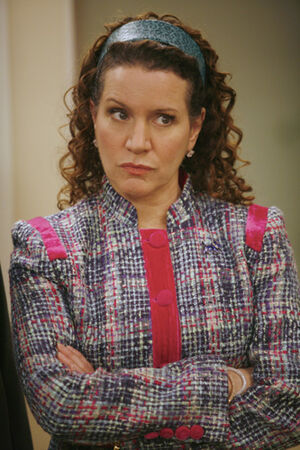 Susan "Susie" Greene is the main antagonist of Curb Your Enthusiasm. She is Larry's enemy, Jeff's wife, and Sammy's mother.

Susie is known for being shrewd, short tempered, cruel, violent, foul-mouthed, and easily angered, despite the fact that she is unaware of Jeff's consistent infidelities. She is very protective of Sammy, which is shown in the episode "Denise Handicapped," when she throws Larry's Blackberry phone in the water when he forgets to watch after her daughter swimming. In "The Hot Towel," Susie bans Larry from her home when he yells at Sammy to stop singing early in the morning. She often irritatingly addresses Larry as "Lare."

Susie is also known for her flashy, somewhat tacky, yet expensive, clothing.

Susie is known for cursing at Larry and Jeff when she is angry, often utilizing the F-word, making fun of Larry for being bald and having glasses, and making fun of her husband for being fat. In the episode The Bat Mitzvah", she often gets told off by Loretta who bans her from her house for cursing and insulting Larry.

In season 8 and 9 she becomes a main character. In these two seasons she does not appear in "The Safe House", "The Bi-Sexual", "The Pickle Gambit" and "Never Wait for Seconds!"