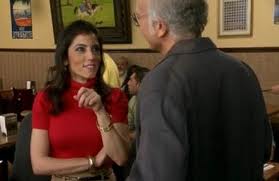 Shara is an anti-Semitic Palestinian woman who either works at or owns a Palestinian chicken restaurant that Larry loves. She hates Jews, but makes an exception for Larry when she sees him rip off Marty Funkhouser's yamulke, which she calls a "Jew cap". The great sex they have makes Larry question his loyalty towards the Jewish community.

See Top 10 List of Larry's Women and vote! She won this.

Retrieved from "https://curb-your-enthusiasm.fandom.com/wiki/Shara?oldid=5193"
Community content is available under CC-BY-SA unless otherwise noted.