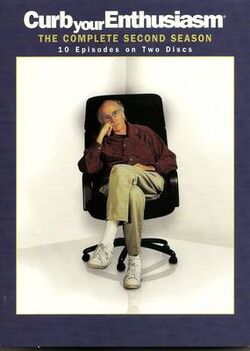 Season 2 of Curb Your Enthusiasm began on September 23, 2001 on the HBO Network.

Larry David pursues a new television project, first with Jason Alexander, and then Julia Louis-Dreyfus. Based on Alexander's complaints, the premise is about an actor who starred in a megahit sitcom who finds it difficult to maintain a steady career afterward because of the public's perception of typecasting. Larry pitches the idea to various networks, but eventually ends up alienating or offending everyone he makes a deal with, and anyone else attached to the project.