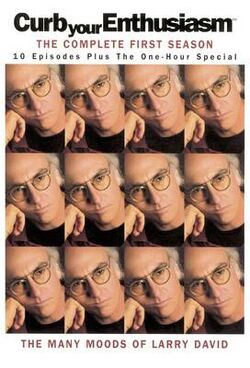 Season 1 of Curb Your Enthusiasm began in October, 2000 on the HBO Network.

The first season introduces us to Larry's post-Seinfeld world, where he is wealthy, has a loving wife, a best friend, and also manages to offend everyone around him. It is not long into the series though that we realize that Larry David is his own worst enemy. He is accused of having an adultery-implying erection because of his extremely baggy trousers that bunch up when he sits down; feuding with a shoe salesman; getting blamed for a newspaper typo after submitting an obituary for Cheryl's aunt; reacting offensively to drinking from his friend's mother's glass; and unintentionally causing someone to believe that his uncle is an incestuous pedophile. Although this season has no major plot line, there is a small plot of Larry trying to obtain a bracelet to give to Cheryl and another small two-episode plot involving Larry and Cheryl trying to have a wire that runs through their backyard removed. (from wikipedia)