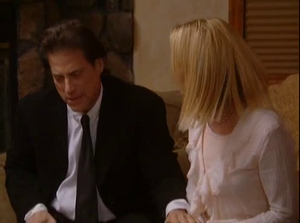 ﻿Richard and Larry apparently knew each other for a long time and have a number of things in common, both being comedians and moving to Los Angeles from New York to pursue their careers. Richard is also a recovering alcoholic and drug abuser, which is occasionally used as a running gag. Throughout the series Richard dates a number of girls more attractive than him and who he always claims is "the one." The relationships are usually ruined by Larry's antics or Richard breaks up with the girl for superficial reasons. In season five Richard Lewis developed Kidney Disease and needed a transplant. When it turned out both Larry and Jeff Greene were blood type matches, the two fought over who would be forced to give the kidney. Larry decided he would do it in the season finale after a life changing trip to Arizona, though he quickly tried to get out of it after he reverted to his old ways. Richard got the kidney from Larry and went on vacation with a new girlfriend, even though Larry was dying from the post-transplant.

Season One: "The Pants Tent", "The Bracelet" and "Affirmative Action"

Season Three: "The Benadryl Brownie", "The Nanny From Hell", "The Special Section" and "The Grand Opening"

Season Five: "The Larry David Sandwich", "Lewis Needs a Kidney", "The Ski Lift" and "The End"

Season Six: "Meet the Blacks", "The Ida Funkhouser Roadside Memorial", "The Lefty Call", "The TiVo Guy" and "The Bat Mitzvah"

Season Eight: "The Safe House", "The Smiley Face" and "Vow of Silence"

Season Nine: "Foisted!", "Running with the Bulls", "Thank You for Your Service", "The Accidental Text on Purpose" and "Fatwa!"