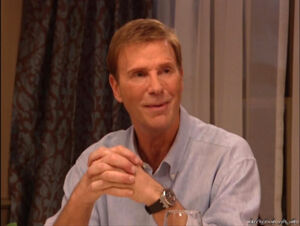 ﻿Marty Funkhouser has known Larry for a long time and considers himself Larry's best friend, though Larry often denies this fact. Marty is very much a family man and plots revolving around his family are often seen in the show. Ironically, Larry is often involved heavily in Martys family problems. When Marty's father died in season 4, Larry stole a golf club from his coffin believing it to be his. In season 6, when Marty's mother died in a car accident, Larry stole flowers from a memorial site to make up with Cheryl. He also got into an argument with Marty about whether or not he could be considered an orphan since he was an adult. Marty has a mentally unstable sister, named Bam Bam, whom Jeff has sex with and tries to keep secret from Marty. Marty has a son, Joey Funkhouser, formerly called Jodi. He used to identify as a lesbian, but eventually realizes he is attracted to men in the episode The Bowtie in Season 5. Larry causes a break-up between Joey and his male fiance. In the episode Running with the Bulls in Season Nine Marty announces Jodi is transgender and he now goes through life as Joey. In season 8 Marty reveals he is not happy in his marriage but is too lazy to get a divorce, though he ultimately does it. He also becomes more dedicated to his religion of Judaism.

Season Four: "The Weatherman", "The 5 Wood" and "The Car Pool Lane"

Season Five: "The Bowtie" and "Lewis Needs a Kidney"

Season Six: "Meet the Blacks", "The Ida Funkhouser Roadside Memorial", "The TiVo Guy", "The Therapists" and "The Bat Mitzvah"

Season Eight: "The Divorce", "The Safe House", "Palestinian Chicken" and "Vow of Silence"

Season Nine: "The Pickle Gambit", "Running with the Bulls", "The Accidental Text on Purpose", "Never Wait for Seconds!" and "Fatwa!"﻿