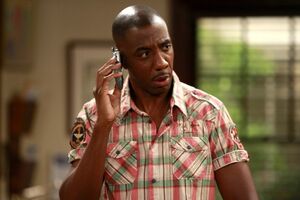 Leon Lucius Black was born on February 29, 1976 in Louisiana, United States. He is the brother of Loretta Black, a woman displaced during Hurricane Edna whose family move in with Larry David and Cheryl David. When the Blacks move in Season 6, Leon Black just shows up and also takes refuge in the Davids' house, even though he already lived in L.A. and never experienced Hurricane Edna.

At first Leon and Larry David aren't very close, but eventually Larry realizes that Leon's brawn can make up for Larry's wimpy attitude when dealing with tougher men. He uses Leon to confront guys he is afraid of, and in doing this, they become friends. Meanwhile, Larry and Loretta Black become romantically intertwined, but she leaves him after becoming convinced that Larry has cheated on her. After Loretta, her children and mother Auntie Rae leave his house, Larry asks Leon, "I guess this means you'll be...?" Leon replies, "Going upstairs to eat this f----- Chinese food in my f----- room," and continues to stay at the house, uninvited.

In the episode The Safehouse in Season 8, Larry mistakenly implies to his doctor that he and Leon are in a romantic relationship and Leon is abusing him.

In season nine he becomes a main character and appears in every episode but "Never Wait for Seconds!"