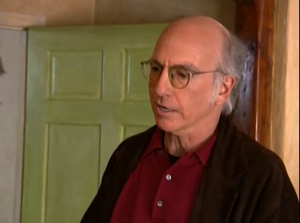 Larry David is the main protagonist of Curb Your Enthusiasm. He is the creator and writer of Seinfeld. Before Seinfeld, he worked for Saturday Night Live and Fridays.

Larry is the son of Nat David, the cousin of Andy David, and the husband of Cheryl David from Season 1 to the end of Season 6 when she requests a separation. They were married for almost 11 years.

Larry has a few close friends. His best friend is Jeff Greene and he occasionally is friendly with Jeff's wife Susie, though more often than not, Susie cannot stand Larry (for the most part) and often bans him from her home.

He is also friends with Ted Danson and his wife Mary Steenburgen, albeit they become less close as the seasons proceed.

Larry is friends with Marty Funkhouser, but Marty considers himself Larry's best friend, whereas Larry does not.

In Season 6, Larry and Cheryl take in a family from Hurricane Katrina, including Loretta Black, who ends up romantically involved with Larry after his separation, and a cousin of the family named Leon Black who lived in Los Angeles during the hurricane. After the family moves out, Leon stays and becomes Larry's roommate until the beginning of Season 8.

Larry also is friends with Richard Lewis, despite them butting heads often times (often times over whether Larry ruined one of Richard's relationships or not).

Larry has no filter and often says exactly what is on his mind. He isn't actively racist, but accidentally offends people with racial comments that he sees as harmless, such as when he asks his two friends, who have adopted a Chinese girl, if they thought she would have a proclivity for chopsticks.

He considers himself terrible with women, though once he is divorced he dates (and fails with) women considerably younger and more attractive than he is.