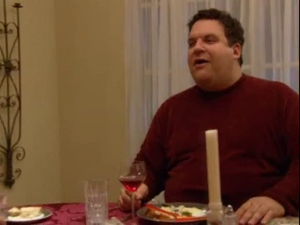 Jeffrey "Jeff" Greene is the deuteragonist of Curb Your Enthusiasm. He is Larry David's best friend and manager, Susie's husband, and Sammy's father.

Jeff is similar to Larry, which is why they get along so well. He is cynical and is not easily offended. He has more of a social filter than Larry, however, which is why he isn't in trouble as often as Larry is. Most of his antics revolve around trying to keep his wife Susie from finding out about his affairs.

Jeff consistently cheats on his wife. In the episode "The Support Group," he sleeps with Larry's ex-girlfriend before they both get into a car accident. In the episode, Officer Krupke, he demands that Larry pretend he enjoys wearing women's panties to cover for a pair of panties found in Jeff's car. He also sleeps with Marty Funkhouser's mentally ill sister, who blurts the secret out at a dinner table in front of Susie. He briefly separates from Susie, but after they rejoin, he continues to cheat on her.

Jeff is, excluding Larry, the only character who's part of the main cast for all nine seasons. He doesn't appear in "The Bracelet", "Affirmative Action", "The Thong", "The Surrogate", "The Bare Midriff" and "Never Wait for Seconds".