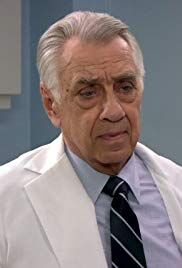 Dr. Morrison is a doctor that has overseen Larry in at least two occasions. He is played by Philip Baker Hall.

Dr. Morrison is a very serious doctor, with a low pitched voice. In Mel's Offer,  Larry visits him because he got a big cut on his forehead. Before the doctor arrives, Larry gets bored and calls Jeff using his phone in the room. Morrison get upset and bickers with Larry about the usage of a doctor's phone. When Morrison inspects Larry's forehead, he drools on the scar, making Larry upset. it is implied in this episode, that he is also Jeff's doctor.

In The Hot Towel, Larry goes to Dr. Morrison after getting his hand burned from a towel. Before leaving, Larry requests Dr. Morrison's home phone number in case of an emergency. He refuses, saying that doctors do not share their private phone numbers. After a few moments of bickering, he tells Larry to get his number from the receptionist so that he can go on with his day, but to not actually call him. Larry later incurs Dr. Morrison's wrath when he dials his number by accident and stays on the phone with him for an extended period of time. Larry later returns for a follow-up appointment for his hand, and further annoys Dr. Morrison by telling him he drove by his house and that they live close by (the doctor's receptionist gave Larry all of his information). He later decides to ignore Dr. Morrison's medical opinion because he didn't like the doctor's restaurant suggestion. When Larry is being chased by Mary Jane Porter's boyfriend, Larry flees to Dr. Morrison's house, where the doctor was trying to enjoy a quiet evening with his wife. Larry begs him to let him stay the night, but Dr. Morrison instead casts Larry out, telling Larry not to get back to him until it's a medical emergency, at which point he will treat him.