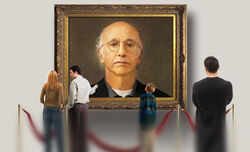 Curb Your Enthusiasm is an American comedy television series that began airing on HBO in 2000. Seven seasons comprising 70 episodes have aired, with an eighth season scheduled to premiere July 10, 2011. The series was created by Seinfeld co-creator Larry David, who stars as a fictionalized version of himself. The series follows Larry David in his life as a semi-retired television writer and producer in Los Angeles and later New York. Cheryl Hines stars as David's wife Cheryl David, and Jeff Garlin as David's manager Jeff Greene. Curb often features guest stars, and a large part of these appearances are by celebrities playing themselves.

The plots and subplots of the episodes are established in an outline written by David and the dialogue is largely improvised by the actors themselves. The subject matter in Curb Your Enthusiasm often involves the minute details of daily life, and plots often revolve around Larry David's many faux pas, his problems with certain social conventions and expectations, as well as his annoyance with other people's behavior. The character has a hard time letting such annoyances go unexpressed, which leads him often into awkward situations.

Retrieved from "https://curb-your-enthusiasm.fandom.com/wiki/Curb_Your_Enthusiasm?oldid=5758"
Community content is available under CC-BY-SA unless otherwise noted.